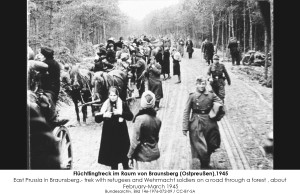 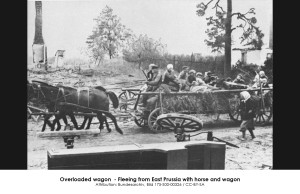 It was not quite dawn as they turned onto the road headed southwest…towards the river Oder which had frozen over this winter. An endless caravan of people were fleeing their homes in hopes of crossing into German-held territory, away from the advancing Red Army. Silhouetted against the bleak sky were covered wagons, carts and wheelbarrows loaded up with bundles and furniture piled so high they looked like they might topple. Oxen and horses strained at their load. Animals led by rope and halter bleated, brayed and squawked as they were pulled reluctantly along.  p. 152 “Threaten to Undo Us”

After the massacre of German civilians by Soviet forces at Nemmersdorf in October of 1944 many Germans fled west, towards the other Allied Powers. Those who stayed in their homes and farms, waiting for official word from the German army, often found it was too late. In January and February of 1945, civilians, mainly women and children fled in panic towards the Oder-Neisse line, which Stalin had already determined would become the new border between Poland and Germany. When the Red Army caught up with them terror reigned. Wagon treks were machine gunned and plundered and women of all ages were routinely raped.