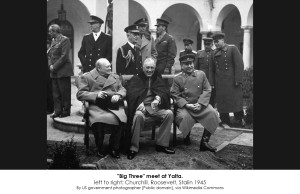 Stalin traced his finger along the Curzon line which encompassed the cities of Brest and Lwów. Regarding the other world leaders with a steely gaze, he squared his shoulders so that his epaulets formed a straight and rigid line. “I will settle for the Eastern territories and nothing less.”

All of those present knew that the co-operation of the Soviet forces, allied with the Western powers, had been critical in turning the tide against Nazi Germany.

Churchill tightened his jowls around his cigar. He was not comfortable conceding anything to Stalin and even viewed Roosevelt with some distrust.

Roosevelt flicked the ashes from his cigarette into the ash­tray and coughed; a sound that rattled from deep within his chest. He pulled the matchbox towards himself and looked up, his pale face thoughtful. Shaking out a number of matches, he arranged them on the map…p.viii

In 1945 the World Leaders met at the conferences of Yalta and Potsdam. Among other decisions to be made was what to do with Poland. Stalin had his own ideas, which resulted in the Soviet domination of Eastern Europe for almost 50 years. But re-drawing of the map of Europe resulted in the prolonging of wartime conditions and more suffering and bloodshed than the Western leaders could have realized.

Threaten to Undo Us  is The 2016 Word Guild winner for historical fiction.

As Hitler’s Third Reich crumbles and Stalin’s army advances, German civilians in the Eastern territories are forced to flee for their lives.

Liesel and her four young children set out from their home in Poland, in hopes of  crossing the Oder River to safety in the west. But all that awaits them is terror, uncertainty and a brutal new regime that threatens to tear the family apart.

Based on a true story, Threaten to Undo Us exposes historical events that took place in the enormous shadow of World War Two.