I’m launching the new cover for Threaten to Undo Us with a blog series highlighting a trip to Europe in 2009. Join me on my adventures as we travel through Poland and the former East Germany! 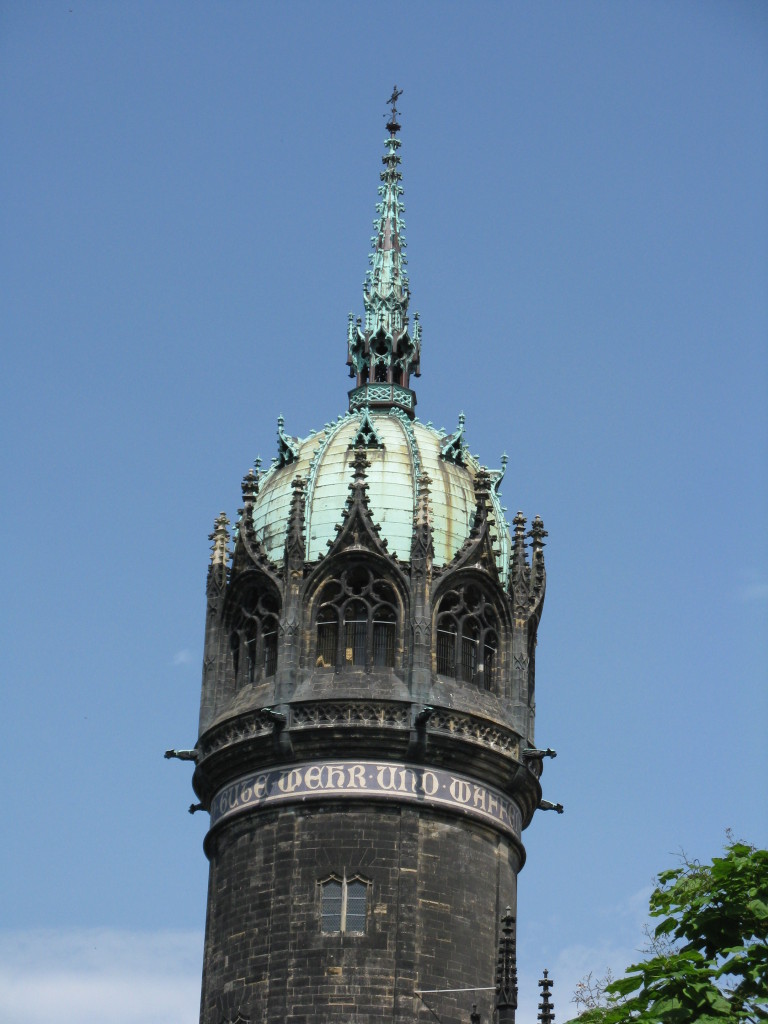 A mighty fortress is our God, a bulwark never failing;
Our helper He, amid the flood of mortal ills prevailing…

And though this world, with devils filled,
Should threaten to undo us,
We will not fear, for God hath willed
His truth to triumph through us.

Rising above the town of Wittenberg, a wide Gothic tower with a round dome and an ornate spire points to heaven. Below its windows the inscription reads: Ein Feste Burg ist Unser Gott, Ein Gute Wehr und Waffen. These words begin Martin Luther’s famous Reformation hymn, sung for centuries in German and English in churches throughout the western world.

Seeing the tower when I previously had no idea of its existence was a thrill because long before I visited the former German Democratic Republic, the first line of Luther’s hymn had become the working title for my book. Since the family in the story was Lutheran it seemed appropriate, and once decided the theme of a fortress began to weave itself into the book, as symbolic of hope and protection for the family. 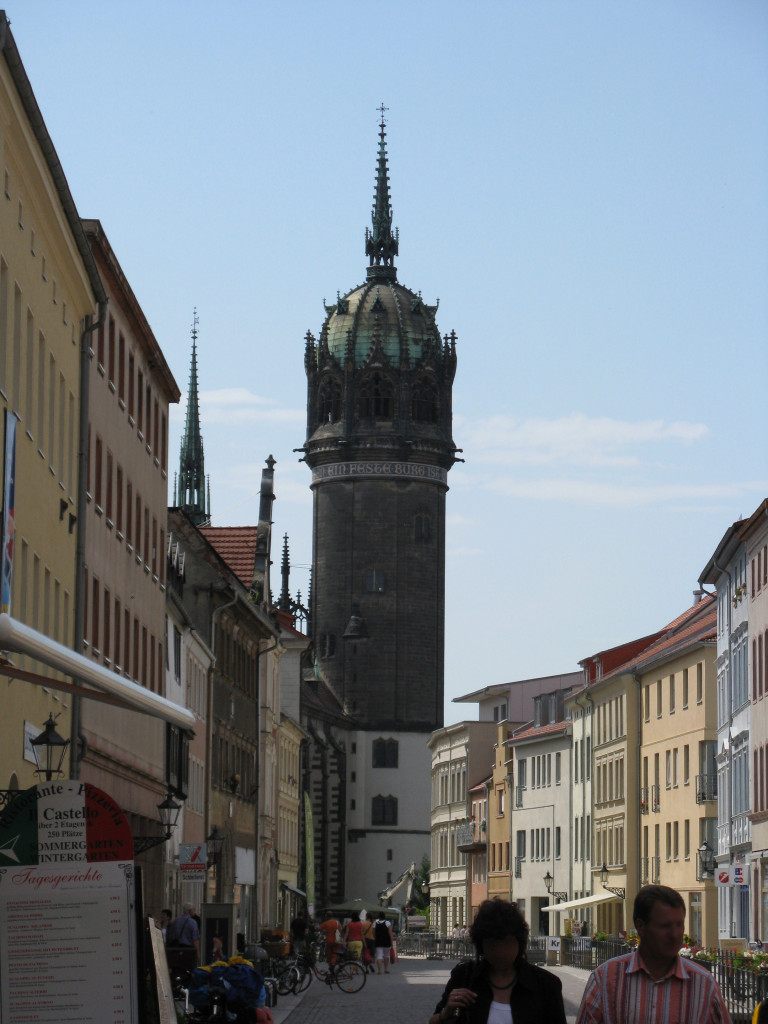 I didn’t take a picture of the door that Luther nailed his 95 theses or protests on, because the original door no longer exists–it was destroyed in a fire and I think when we were there the memorial door was under renovation. (More information on the historic site can be found here: http://www.sacred-destinations.com/germany/wittenberg-castle-church ) 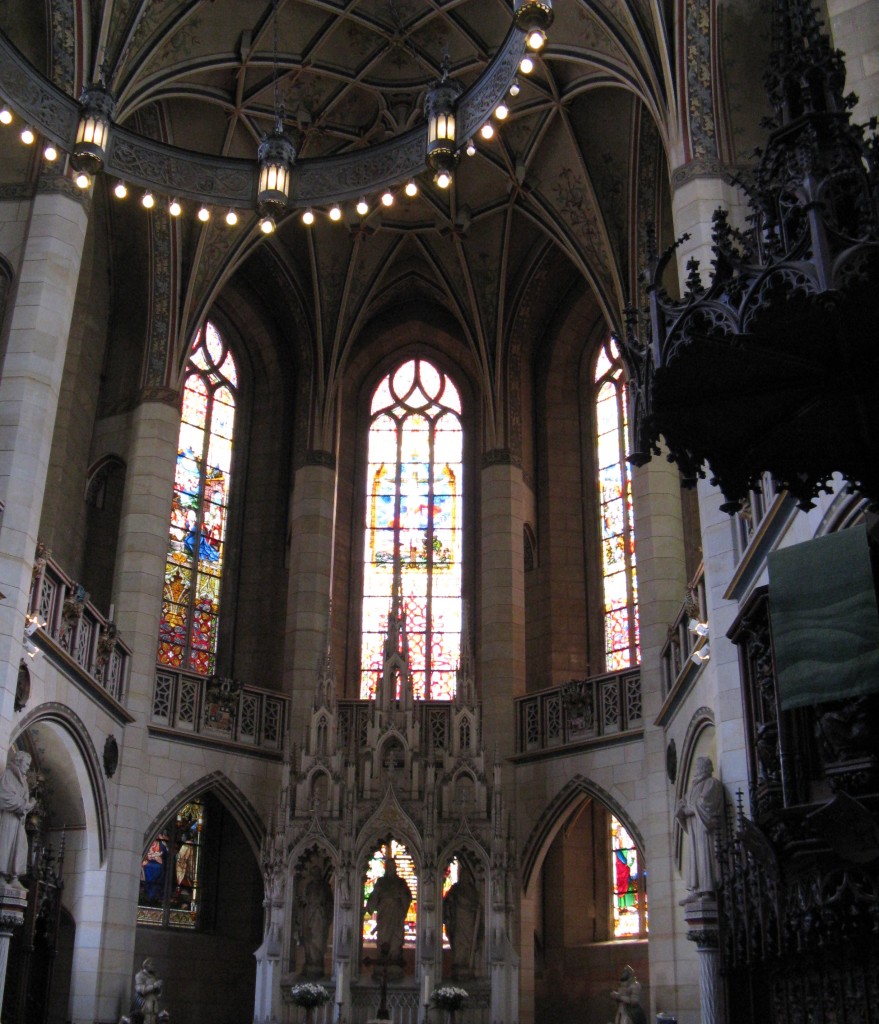 Luther nailed his 95 theses to the door of the All Saints church ( also known as Castle church) and is buried here.

Luther’s story begins before that though, with a profound change that happened in his heart. As a monk at an Augustinian order, Luther studied theology and Scripture extensively. He wrestled in particular with the book of Romans and its contrast with the Roman Catholic church practice of offering partial forgiveness of sins in exchange for money. According to the apostle Paul, faith alone was sufficient for salvation. Luther’s understanding of righteousness by faith was incredibly freeing and has been for millions since.

The certainty of salvation as a fortress of God’s making is expressed in the second verse of the hymn:

Did we in our own strength confide, our striving would be losing, were not the right man on our side, the man of God’s own choosing.

God is a fortress of hope when life seems hopeless and a certainty to cling to in uncertain times.

But I discovered Wittenberg has a dark secret…