May 13, 2022
by Rose Scott
Comments Off on The Boys in the Boat, by Daniel James Brown

Book review: The Boys in the Boat: Nine Americans and their epic quest for Gold in the 1936 Olympics by Daniel James Brown Like narrative non-fiction such as Unbroken by Lauren Hillenbrand, or biographical World War Two fiction? If so, … Continue reading →

Forty Autumns chronicles the experiences of one family during the iron-fisted regime of the German Democratic Republic (1949-1990). For Willner’s family as for millions of others behind the Iron Curtain, a new normal, almost a mirror image of the Third Reich, intrudes upon their lives. Continue reading →

June 1, 2017
by Rose Scott
Comments Off on Book Review: Under the Silk Hibiscus

Heart Mountain sounds like a lovely place, but it is a Japanese internment camp. Quarters are cramped, bare and cold. Food and employment are in short supply. Along with other Japanese Americans from San Jose, Nathan Mori and his family … Continue reading →

July 7, 2015
by Rose Scott
Comments Off on A world turned upside down?

World War Two is over. But not for everyone. A new regime rises. A family is torn apart. Is there hope in a world turned upside down?  Amazon.ca, Amazon.com Amazon.co.uk 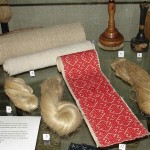 October 21, 2013
by Rose Scott
Comments Off on Everything I wanted to learn about flax …

Everything I wanted to learn about flax I learned in The Big Book of Flax, by Christian and Johannes Zinzendorf You are probably thinking of those seeds that we sprinkle on our yoghurt in a fit of healthiness. Flax, however, is … Continue reading →