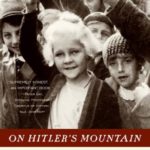 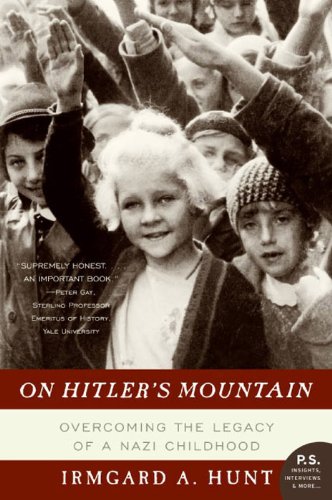 What is it that caused ordinary Germans to follow  Hitler? Why did they go along with his policies and how was it that they didn’t stop the  murder of six million Jews? Only the people that lived in Nazi Germany can truly say and they are now few and far between. After those years, many chose not to speak of them again.

Irmgard A. Hunt, a child during Nazi Germany, is a rare voice who was able and chose to share her unique story.  Hunt’s memoir is that of an ordinary child and her family, living at an extraordinary time and place. Her childhood home in Berchtesgaden, Bavaria, was in close proximity to Hitler’s summer retreat in the mountains and afforded her a view of the road up the mountain. She watched Hitler and prominent Nazi officials drive up to the extravagant mountain estate. As  a young child, she even once sat on Hitler’s lap. Her parents were proud of the celebrity this encounter brought the family. For Hunt however, meeting Der Führer coincided with recurring nightmares of a devilish monster with a forked tongue and fangs sitting heavily upon her chest.

Many of her family, including her mother were Nazi supporters. Among her classmates sat the children of Nazis. Hunt and her sister were immersed in Nazi ideology taught at the school and the after school Kindergruppe program; a prelude to the Hitler youth. She participated with typical German obedience, at least for a time. As Hunt grows older, she also grows wiser. A keen observer of human nature and the inconsistencies of the system, she began to reason out its flaws as the destructive nature of the regime played out.

Hunt’s memoir is written without aggrandizement or excuses. She is no hero; her voice that of an ordinary schoolgirl. But it is the very ordinariness of Hunt’s lower middle class family, that is the most revealing and in a sense most chilling. She states, “the seemingly petty details of these people’s lives are actually often symbolic and always telling…in the continuing struggle to understand the past—both personally and as a lesson from history—these details are too important not to be recorded and thus preserved” (p.1).

In this, Hunt has done an admirable job preserving not only her own past but the past of the society in which she lived, going back as far as the Weimar Republic, for it is there that the seeds of Nazism first took hold.  She has taken great pains to show the crushing poverty and hopelessness of her family and other middle class people trying to eke out a living during the 1930’s. Hitler’s promise of an economic miracle allowed him to gain a stronghold among the masses and ignore the less savoury aspects of his program. Through the Party system, it became almost impossible, even for those with strong convictions, to stand against the regime. Much to his detriment, Hunt’s own grandfather tried to do so, against the wishes of much of his own family.

Wisely, Hunt does not end her narrative in 1945 at the close of the war, but takes us into devastated post-war Germany, under American occupation. One of her keen observations, is the conspiracy of silence around the war years.  Most of those she knew refused to honestly reflect on the recent past or speak of their part in it.

Hunt’s viewpoint is up close and personal, gleaning not only from her own recollections but the memories of her relatives and family friends, who were adults at the time. Valuable insights into totalitarianism are to be gained. The astute reader will be able to glimpse not only himself or herself but those around them, within these pages.