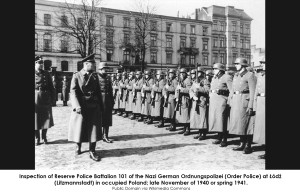 “I’m out of sugar,” said Liesel. Usually she would have just gone to the neighbor, old Pani Zawadski,.. “I was going next door to borrow some.”

Ernst shook his head. “You can’t,” he said. “I am on patrol and I cannot be seen to be associating with the enemy in any way. And that means you cannot mix with any of the Poles either.”

Ernst had said little about what he was doing. Some sort of police work Liesel assumed. She did not really want to know, but her life had definitely changed.  She thought about all the ways that their lives had intersected with those around them. The neighbors, the hired help, and the shops in Łódź that she had frequented.

Shopping had become an annoyance. Many of the stores she used to patronize were off limits now, as Germans could not be seen at Jewish establishments without repercussions. Furthermore, since the occupation, they were calling Łódź “Litzmannstadt” after some important Nazi General. The Nazis had renamed so many streets, it was confusing to get around the city.   p.83 Threaten to Undo Us.

The city of Łódź was occupied in September 1939 by the German army and shortly thereafter, renamed “Litzmannstadt” after Karl Litzmann, the German general who had captured the city in the Great War. Infamously, Łódź was the site of one the largest Jewish ghettos, before the inhabitants were taken to concentration camps. In 1945, with the occupation of the Soviets, the city became part of the “People’s Republic of Poland.”